What a great Trip on my last big run of work(if you can call it that).

I could not have picked and scripted it any better.  Most everything I have done in the past twenty years was represented in the last ten days.

It started in Tulare, California with the NCBA’s first dairy based stockmanship and Stewardship program.  I have worked with lots of dairy cattle and producers in the past years and enjoy them both, admire the level of professionalism of the dairy industry, and really believe cattlehandling can have a very positive impact on dairy production.

I got to work with my long time friend and presenter Ron Gill, and the California Beef council has always been great to work for.  Jill Scofield lights up the room (maybe the whole state)with her passion for promoting all things Beef.  My very good friend Bill Dale, head of the California Beef Council was there and as a real bonus, his Daughter Kendall came with him and it was so much fun seeing our little girl has grown up to be a very fun and beautiful young lady.

Got on a plane in Fresno and arrived in Springfield, Missouri about midnight.  I’ve been to Ozark fairgrounds before at horse fairs and farm shows.  I’ve been going to and demonstrating at these things for well over twenty years.  I’ve seen lots of things and met lots of people at em.  Purina and Priefert were at lots of them, and in Springfield I was in a Priefert roundpen, and Ernie Rodena of Purina fame was there just like old times.

When I was in the prime of the colt starting demo days there were lots of weeks I’d be demonstrating starting five or more colts a week.  It was a great time in my life.  I love taking a colt and making real nice changes in a couple hours that will effect the horse the rest of his life.  It was so much like riding bucking horses when I was rodeoing. You didn’t know what you might be getting on and what might happen.  I was never scared to throw my leg over anything.  Probably lucky I survived it with no injuries.

I got to start a colt in Springfield.  He was a four year old roan gelding that had been handled just right.  My first demo was in the big arena, and I had Mike Burris help me on his saddle horse.  I got him saddled pretty easy and when I turned him loose he bucked pretty good and moved out pretty fast with the saddle. 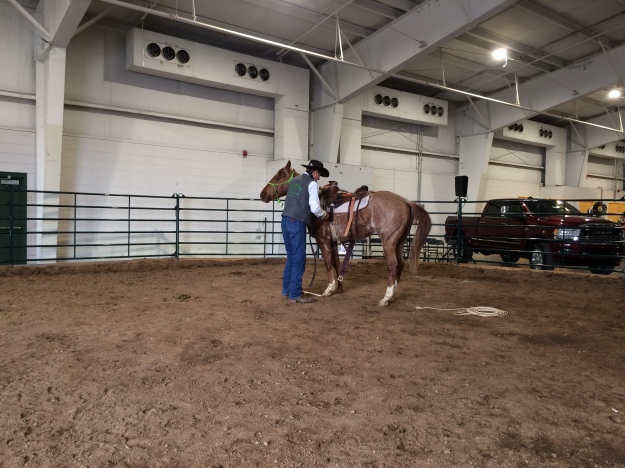 I got him ready to get on and had Mike go in front and we got him carrying my weight and moving out without getting to bothered.  It was a real good first ride and I’m glad I didn’t have to start him in the round pen.  The next three sessions were in the round pen and then I used him for my last cattle handling session in the arena.

I had so much fun and felt real good about how the colt turned out, and how I used the colt starting to help folks understand horsemanship and cattle handling.  I am so glad I got to do it on the last big run as so much of the past twenty years was spent putting the first ride on a horse.

I was very fortunate to end up right in the middle of the biggest horse “bubble” ever.  It was so amazing for a guy like me that grew up only seeing ranch type horses and rodeo horses, to witness all the different ways people use horses.

To be a part of all of it and to get to do a book with Western Horseman, videos and demonstrations with the American Quarter Horse association and work for great company’s like Purina and Priefert, was something I never would have imagined.

In all honesty I don’t think it would have happened if it wasn’t for Buck Brannaman and him getting me involved with the “Horse Whisperer” movie.

I saw so many people thinking they wanted to be in the world of the horse, and I saw a lot of extreme things that maybe didn’t fit the horse or the people.  When the bubble burst no one saw it coming and it really changed things.  I think it is much better as I don’t see all the hype and extremes like it was when there was so much money everyone was out there trying to grab.  Horses and people are better off when common sense and true knowledge is the driver rather than money and ego.

Wife Tammy flew in to Springfield on Sunday afternoon and we got to have supper and spend time with our old friend and partner Michael Richardson.

He was doing demos as well and I watched when I could and he was as amazing to me as ever.  If you get to feeling sorry for your self, go spend a day with Michael and try to stay in his wheel tracks.  He has more try and heart that anyone I know.

Monday morning we went to Agape Boarding School in Stockton, Missouri.  I went last year and rode for the Brothers and with the boys.  Greatest experience ever and we had a day so I wanted to spend some time.  Of course Tammy fell in love with all of these great kids and wanted to take them all home with us.  All I know is horses and cows are much better than drugs and abuse and with the guidance of some great people these boys are getting the chance to be and live cowboy and learn that in the world of horses and cows they don’t lie and they don’t cheat and they don’t judge, but give back what you give them.  I love the place, the boys and the people that are dedicated to helping them. 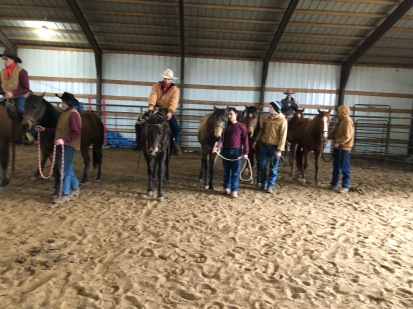 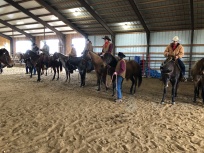 They are having a horse sale June 15 that the boys sell the horse they have worked with.  Look it up online.  If you can come see what “Agape” means and is all about.

Next stop, a couple hours up the road we met a group at the “Square B” ranch.

Eric Grant is a fellow that I have been working with and learning from for several years.  We worked on video projects for the National Cattleman’s Beef Association, and when he worked for Angus we did several TV episodes.  When Eric quit working for Angus we had supper one night and he said he had ideas and wanted me to be a part of them.  I didn’t ask what they were or what he wanted, I just said I was in for anything he wanted me to be a part of.

They have put together a very talented bunch of people and we went and visited with some of them sharing ideas.  I still don’t know and don’t care what he has in mind, but I’m in.  It was a fun day and we might have seen one of the  nicest, well run ranches in the country.  Stay tuned.

We then headed to Olathe, Kansas and had supper with the Trabon Family.  Tim Trabon was one of my real good friends and he left us a few years ago.  I have really enjoyed seeing how they went on and are moving forward and doing things better than Tim ever did.  He would be very proud of all of them.  It was so much fun laughing and telling stories, and to hearing the things they have done and are going to get done.  Patti keeps it all together as she always has.

Tim and I were pulling into his driveway one night and it was a tight fit with his truck and trailer.  Patti had moved the garbage bins to the other side of the road knowing we would be pulling in.  Tim made me aware of how smart and observant his wife was and he really appreciated her.  Great family.

Of course we didn’t want to leave so we ended up not getting to Salina, Kansas until midnight and then I had to work pretty early the next morning.  We were at the  Mid America farm show and I did a horsemanship demo in the morning and a cattlehandling demo in the afternoon.  I’ve been there a few years in a row so I know some and met some knew people.  I was tired and a little off so I didn’t work the cattle as well as I could have, and was a little disappointed in that, but felt good about the way I presented to the folks in attendance.

Headed south for six hours and got to McAlester, Oklahoma about nine that night.  We set up a portable tub system and some panels at 8 AM and was presenting to the crowd by about 9:15.  It was the OSU cow calf producers “Bootcamp”.  We had a fun little bunch of calves to work and I had fun presenting to the real receptive cattle and crowd.  I felt much better about how I worked the cattle than the day before.

I am writing this recap on my flights home to Bozeman, Montana.  We just landed so I am going to wrap this part up.  United Airlines added to my positive experience by giving me an upgrade to first class from Denver to Bozeman!

When I get caught up I’ll tell you about my experience in Fort Worth, Texas and give you some thoughts on the last twenty plus years working in the greatest industry with the very special people and animals I have come in contact with.

I am so exited to get moved and to work on my knew challenge, running a great ranch.