We finished the third Stockmanship and Stewardship event in Stephenville, Texas last Friday and Saturday.  Many conferences start at 1 in the afternoon so they don’t have to provide a noon meal.  It’s just economics as food is a big expense.  Not in Texas.  They not only fed us lunch, but Catered Heart 8 Bar-b-que which is very good.  We ate very good the whole time, from great cow beef tenderloin to full breakfast and fajitas for lunch.

Everything was great from the facility, the horses, cattle, staff and speakers and the attendees.  Once again, a great learning experience on lots of thing having to do with Stockmanship, Stewardship, and Beef Quality Assurance.

The theme of the program was how to make the change to better stockmanship. They had three very prominent stockman on a panel discussing how they had seen and made changes in the operations they were involved with.

They all spoke about Bud Williams, a very well known and respected stockmanship expert.  All three on the panel told as to how he kind of offended many of the people that  came to learn or were there to help.  Many were cowboys that got offended.  I watched the crowd as they told the stories and most were very amused and almost seemed to approve.  Bud Williams skills were great and valuable, but many of the folks missed the chance to learn because of their state of mind.

It is always fascinating to me to see how some people get offended and how some are willing to not get offended from the desire to learn.  I’ve seen many horseman and stockman make people feel bad, and I just don’t understand how  anyone really benefits.

It was daughter Mesa’s Birthday so we met in Fort Worth and ended up going to the snaffle bit futurity to watch.  It was the reining competition when we were there.  Mesa knew lots of folks and introduced me to some.  One fellow had worked for a real well known colt starter several years ago.  He was a little surprised at how he went about it as the boss was a student of Tom Dorrance, a real legend in the horse world for getting people to use the right pressure on horses.  He wasn’t bad mouthing him and didn’t say he thought he was wrong, just that he though it would be different.

I really enjoyed the day with Mesa, and am so proud of the hand she is and that she is searching and working to be the best she can be in her way, not mine or anyone else’s.

I flew to Durango, Colorado next for the “Horseman’s Summit”.  I was asked to come and introduce Temple Grandin as she was the keynote speaker.  She gave a great presentation and the people in attendance ate it up and really got some ideas.  She didn’t tell one thing about how to sit the horse or hold you reins or any of the training things.  It was all about the mind, and right and wrong in the way we care for and handle our animals. 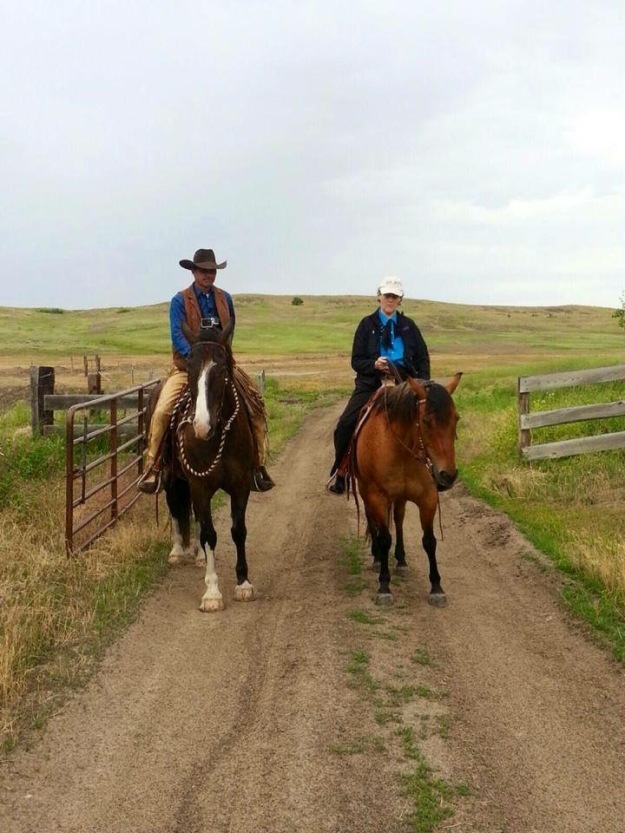 [Temple and I horseback doing a cattlehandling video for NCBA.  Temple suggested I use a GoPro on my horse to get some good video.  She really does think in pictures.]

In the past I didn’t see how valuable her presentations were and I let my and other people’s egos get in the way of my learning from Temple.  Just like her not improving the way I sit on or handle my reins when I am riding,  she might not tell me the proper place to be gathering cattle in the pasture(and she might)what I learn from her enhances what I know from experience and other people.

I don’t think many cowboys want to learn from her, not because she says things that offend them, it’s because she is to different and they can’t make the transition.  Too bad for them.

The next speaker was Dr. Steve Peters, and he spoke on horse brain science. He speaks about working with horses from the scientific side as far as fear based reactions and pressure and release of pressure and what it does to the brain and how different training methods effect the brain activity.  I enjoyed it as I think I might be on the right trac with my thinking.  If it went against what I thought I might not of enjoyed it near as much.  It would depend on my “ego-nomics” for that day.(I just made that word up)

There were lots of good speakers on really interesting and important subjects.  They had live demos in the afternoon to tie in with the lectures in the morning.

The first day was great and I had lots to think about.  I heard several comments about how terrible the “ futurity “ world was.  The people at the conference had a completely different opinion than the people in Fort Worth that hooped and hollered when a snaffle bit horse got in the ground and slid to a stop or turned around really fast.  One interesting thing was that a previous speaker and a very well thought of clinician whose name was mentioned many times in a real positive way at the conference was the same person that the fellow had mentioned had started Colts and thought he did things faster with the young horses than he would have.  This fellow was showing horses at the futurity. So the people that were criticizing the futurity world for too much pressure thought highly and almost worshiped the fellow that the guy showing horses in the futurity world thought put a lot of pressure on when starting colts.  Interesting.

The second day was great for me.  Dr Rebecca Gimenez Husted  gave incredible presentation on horse rescue and preparing for natural disaster and preventing man made disasters.  We need this presentation in the beef industry.

Next up was a speaker from Germany.  His name was Dr. Gerd Heuschmann, a veterinarian and student of classical dressage and “Biomechanics in Riding” was the title of his presentation.  I was very surprised when he mentioned the name of a fellow I have rode and roped with a lot, Rolland Moore, and how impressed he was with his horses and horsemanship.  His talk was on improper riding and training creating lame and bad minded horses.  He was a great speaker and used the science of the anatomy of the horse to prove his thoughts.

Again it fit with many things I believe so I liked it very much, and proved in my mind I’m on the right track.  I’ve been criticized very much on my stance on overbending of horses by some in the horse world.  If you are interested in the horse mentally and physically, you have to see what effects things have on the horse.  If your ego causes you to only see it from a different point of view, like how you want to see things, you might not be able to see it.

We had lunch together and talked a lot and went out and watched the arena demos together.  I learned a lot on how to sit better on a horse.  I really am exited about the new things I am thinking about and bought both of his books and just about have one of them read.

I really didn’t know why in the heck I was there and was thinking I could be home.  I am so glad I was there.  When I looked at the audience the folks (mostly ladies) really enjoyed it.  There were a couple other guys that were soaking up the knowledge and it looked like they would use it.

You see, it seems to me the cowboys of the world, or the upper level English riders were not there but really needed to be. The crowd that was there were just adding to what they already believed.  I’m not sure any one in attendance had a life changing experience.

The same thing happens at cattle events.  The ones that come are not the cowboys that got offended when someone did things different, unless the boss makes them come.  That’s where I think it is important to draw them to better stockmanship and horsemanship rather than driving them away.

I think it has a lot to do with what Dr Peters had to say about the brain and it’s reward and fear systems.  Same thing that goes for horses might go for humans.  We need to look at this to get better “people-man-ship” skills to get people to change.

We all have the choice to decide what we think is right and wrong.  We have the choice to put pressure on ourselves and create contentment or stress in our lives.  I want to be content and have made decisions to not be around people that create stress and pressure in my life, or at least not accept the negative pressure from them.  I have the ability to do that, and so do you.  You can create your own pressure and contentment level in life.

Animals can’t.  When you put a fence around an animal you just changed his freedom and abilities to make some decisions.  Because of this we are responsible for the pressure and contentment in our animals life.

The big question is are you willing to look at common sense and science to really analyze and see if you need to change, or is your ego in the way.  Can we find ways to get others to do the same?  If you really care about animals and people you will try.

I thought this would be a nice way to end this discussion.  Will your ego allow it?