Wife Tammy is finished at “Home Ranch” and has spent a couple days in our new home, an old time log ranch house right on Mission Creek.  When you do the dishes you look right out at the fish swimming by.  I really like it and I think Tammy does too.

We had a great supper tonight.  Chuck roast and spuds and carrots all mixed in.  She cooked some soup bones all last night and then used the broth with wine and garlic and I don’t know what.  All I know is that it was real good eating.  Seemed like the kind of meal you should eat in this western ranch home.

The meal started four years ago last spring.  A bucking bull cow calved and the calf had a crooked front foot.  Son Rial put a splint on it and wouldn’t let his mother put him down.  I was gone and didn’t see it but I guess is was pretty crooked. Well he got along and did well.  We were bucking young bulls and they bucked him and he really fired.  Mesa and Tammy (the bucking bull experts around here) decided to take him to The PBR finals and enter him in a futurity.  He must not of liked the big city lights because he ran off and didn’t buck a lic. 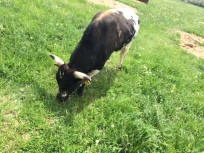 He came home and was kind of a pet.  He was real friendly and liked to be scratched.  He got fat and always had good feed.  His foot was getting worse turning out (we called him “Crook”).  He was getting big and I was worried about him being crippled.

In August we took him and a baron cow to Tizer Meats in Helena and had them killed and processed.  I worked with them quite a bit getting them ready by loading and unloading them them and keeping them by themselves to get used to it so they didn’t get adrenaline and end up off flavor and tough, when they went to slaughter.

I thought they were going to be real good but you never know.  We had Crook made into beef sticks, hot dogs, good steaks and some roasts.  The butcher’s didn’t think he would be good eating as a four year old bull.  He is a little tougher than the cow, which is excellent flavor and tender as can be.

When I was in high school we had a small custom slaughter plant, and my grandfather was a butcher all his life, so I know what the outside and the inside looks like and have learned to be pretty good at getting one that is good eating.

We’ve had Crook steaks and they have real good flavor.  They cut the steaks about 1/2 inch thick or less,  which makes it a little more like the beef I ate in Mexico.

Tonight made it all worthwhile.  A great eating experience that really hit the spot.  An animal that was born and raised on our place that I feel had a very good life.  We provided for him, now he is providing for us.  A good way to live.

I love beef.  I eat it a lot.  I don’t care if it is grain finished, grass finished or whatever.  I’ve heard wine finished is awful good.  I used to work for a week in the feedlots in Alberta, and the night before I flew back home I had a favorite steak houses near my motel and would reward myself with a big old juicy Alberta raised beef steak.  Quite a reward!

I’ll never forget my first trip to Mexico as a consultant and after working all day in a huge, very well run feed yard and slaughter facility, having a high class meal right there on the premises and being shown the very best in Mexican hospitality and great eating.  I will never forget the great meal and the great people in Mexico, and it was all for and because of beef.

Colorado State University Meats team does a deal that they have several different quality’s of steak and do a audience test to compare and show what people like without knowing what it is. A blind taste test I think.

One year I was sitting with some ranchers and a couple feedlot operators and we all picked a grass fed steak as the best, as all of the audience did.  It was high quality and very good.  My table was not very happy as it was not there kind of beef.

Every other time I have been through it has been grain finished that wins.  It really depends on the quality you buy.  As they pointed out it’s not always the most expensive that is best.

The thing I learned from this is I liked them all, in all the times, just some I like better than others, but I didn’t spit one piece out on the floor, and was always willing to have another bite.

When someone complained about meat being tough, my grandfather would say “it would be hell of a lot tougher if we didn’t have any”.

So the thing that has made my people a living from ranching to feedlots to slaughter houses, and has been such a big part of my life for the last ten years, working with the people that bring you and me the great eating experience of beef, and the animal that if managed correctly can be so good for our environment and help feed lots of people from resources that could not be used by humans if it weren’t for cows and other grazing animals.

So to me it doesn’t matter if it’s grass or grain finished, bull or steer,  young or old, from Canada, Mexico or the good old USA, I enjoy the people and the lifestyle it takes to raise beef.  I eat it for breakfast, dinner and supper, sometimes in the same day.

I am real thankful for beef and the one that cooks it so well for me.

Thanks Crook, I miss you and enjoy you at the same time.