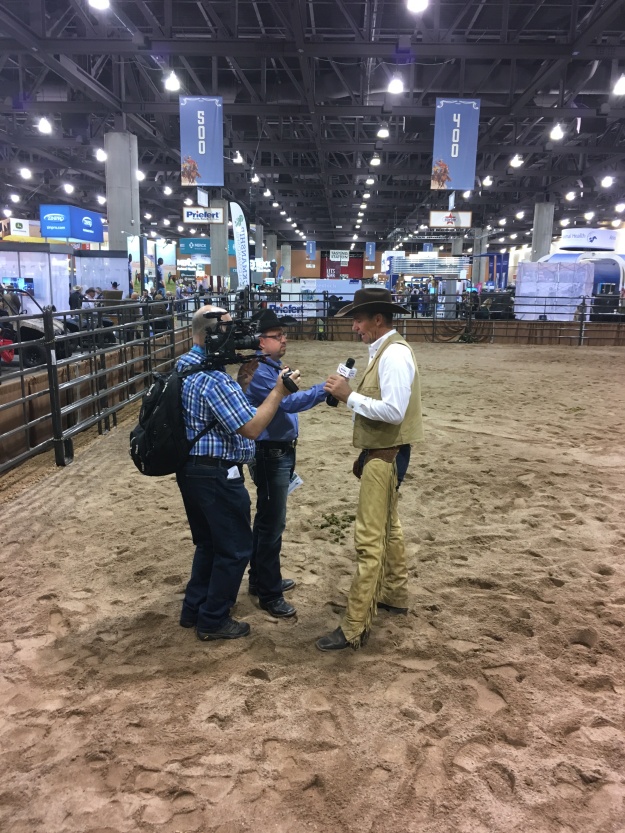 Just on my way home from NCBA convention in Phoenix. It’s really the end of our year for Stockmanship and Stewardship, as well as the beginning as they came out with the places we will be holding regional events in 2018.

Ron Gill, my friend and co presenter at these events received the BQA educator award for 2017. He sure deserves it and joins lots of other great educators in our industry that have won this. I have spent a lot of time with Ron, and I really can’t imagine how he could devote any more time and energy to educating and improving the beef industry. He lives what he teaches.

( Wife Tammy and Myself were honored to be presenting with Ron Gill, BQA educator of the year.)

We did lots of demos, and the theme was working with young animals. I got to take it a little farther and work with a young cowboy.

Todd MacCartney and Dean Fish do all the set up and organizing for the trade show demos we do. It’s quite an undertaking to get dirt, pens, horses and cattle in and out of downtown Phoenix, plus keep everything on schedule. They really have figured out how to make it all work smooth, have fun doing it, and create a great place for “edutainment” for lots of cattle folks attending. They live what they are helping present.

Every year they want some excitement and entertainment to open the trade show. Many times they have a dog handling demo and folks really enjoy it. This year we decided to do a colt starting demonstration and I was picked to do it. I thought it would be nice to have two colts started at the same time. I also want Todd’s Son Ben to help with the colt starting. I’ve been watching him ride and develop his skills and thought it would be a great addition.

The colts we used were full brothers that were “Hancock” bred. My wife found them through her network of friends, and I thought they may be to gentle as she said they had been handled quite a bit.

Well it turns out they were perfect. They had been handled real well. I took the three year old and Ben the two year old. They got called (by some smarty) Old Blue and Young Blue, and of course I was Old Curt and working with young Ben.

We got them saddled and I was able to compare working with the young horse to similarly working with young cattle to get them calm and ready to preform. The process is very similar on both and I think I have a real advantage from starting so many colts and getting them settled and knowing how to do the same with all animals.

We had 45 minutes the first session so we saddled them and moved them around and got them ready to get on. We then had a break from the colt session and put them up for an hour and a half. Then we saddled them again.

When you are doing a demo like this, it is about education and entertainment.
Well what we had done so far was education, but I knew we needed to add a little entertainment. So we just stepped on, and I knew Ben could handle it, and would enjoy it. We gave them their head and just let em move out. The colts did great and things got a little fast a time our two, but it was fun and exiting and the colts actually needed to move their feet and go somewhere anyway.

We got our ropes down and swung em all around em, put it around their legs and under the tail and really let em get used to all the things a ranch horse should be exposed too.

I really enjoy seeing how presenting things properly to animals and people makes lots of difference in outcomes. To little is as bad as to much sometimes.
The more experience I get, the better I am at reading the proper pressure to use.

Ben just went along with what I was doing, and added his own personal style to it and really helped the colt. We worked with em for the next two days and he really made some nice changes with his colt. I wanted to expose him to some of the things I’ve learned that have worked for me, and to try to get him to exploring what would work for him. He’s the kind of kid that has a real strong mind of his own and knows what he wants, but if you offer it to him right he will take it and use it in his own way. A lot of people don’t like to work with “Hancock bred horses” but I feel they are the same. If you present things in a way they can accept them they will be good, but if you try to fight or force, you had better pull your cinch up and your hat down because things are going to get western.

Well, things were going along real good, but I thought Young Bens Young Blue was going to have to buck a little. We could of snuck around him and no one would have seen it and then at some later point it would come out. As a colt starter I feel it is your job to sometimes have to go ahead and expose one so he does buck , and you need to ride him forward through it to get him over it. This is why I think the first ride or two you get a little aggressive and let some of that come out, then you can go on with the stuff that makes a good horse. If it’s in there (bucking) you need to get it out. If you can’t ride good enough to ride one through it, maybe you shouldn’t be starting colts, at least the ones we need to have try enough for real work.

So I figured Young Blue would buck a little if something kinda surprised him, so I threw my halter rope under my horses neck and caught on the other side to back him up. Ben did the same and Young Blue might have got touched with a leg and the having the halter rope pop up on the other side was more stimulus than he needed. So he went to bucking a little, not real hard, but hard enough for it to buck Young Bens microphone out of his pocket. Well Young Ben got his horse rode, microphone caught and things under control, and I got lots of enjoyment out of this situation I got to set up.

We really made some nice changes in the colts and I feel like we really added to what good work had already happened to them. I really liked my colt and I think Ben liked his. We all learned a lot and also I feel the folks watching go to see some nice changes. It was very enjoyable to me. 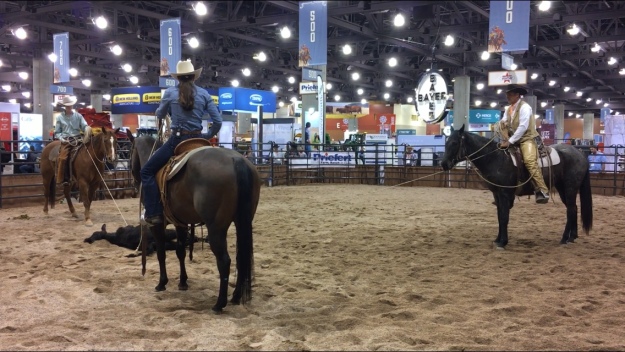 (My last ride on “Old Blue” with Ron Gates in background)

I have started lots of colts in lots of Priefert round pens, but it has been awhile since my long time friend Ron Gates added his smile and positive attitude to the mix. It was great to get to work with old friends and new ones together.

There are so many things to learn and think about when it comes to working with animals. Last year was a great year working with the whole Stockmanship and Stewardship crew. I feel 2018 will be even better.

(The whole crew working as a team)

I’ll tell you one more thing that happened to me at convention. I like to go set in the bleachers and prepare myself from where people are going to be watching.
It helps me see what they are going to see. Vendors were setting up and getting ready for the trade show.

While I was sitting there, Superior Livestock was having a video auction and it was being broadcast from their booth at the trade show. They always start with the National anthem, and I heard it and started to try to figure out where it was coming from. I found an American flag and stood up and as I looked out over the trade show, I saw people stand and pay respect to the flag and the National Anthem. I was up where I could see everyone within hearing distance, and everyone I saw had their hat off and their hand over their heart. Nobody told them to do it, and some of them had no way of knowing where it was even coming from. It was one of those moments.

As I am on this airplane trying to keep my coffee from spilling because of the turbulence and reflecting on the last few days, I realize how lucky I am to be involved with the people in the livestock industry.

Chase DeCoite heads up the Stockmanship and Stewardship program for The NCBA and he has really added to the commitment to educate. My friends and co workers Ron Gill, Todd MacCartney, and Dean Fish all live what they say and teach.

Young Ben and all the young people I have met this past year in this livestock industry really inspire me and give me confidence that all sectors of agriculture are going to get better as we go, because of the great young folks and the technology they are going to use. We that have practical knowledge need to share and mentor to help add common sense to it, in a way that makes sense to them, not us.

As I was observing from up on the bleachers that day and watched all those folks when our National Anthem was playing, I was real proud of being in this industry. I’ll say it again, I think I have the best job in the world!